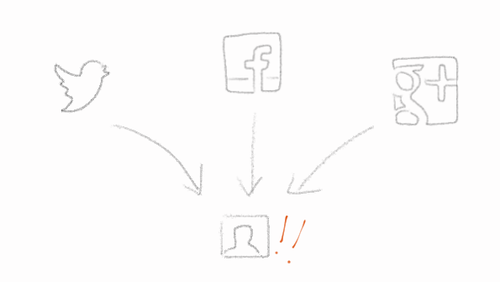 There’s really a lot of news to keep up with, and I get my news from many sources: articles about stuff I’m interested in, status updates from people I know, stuff people share with me on different social media sites. It’s not easy deciding what to read now, what to read later, and what to read never.

It gets complicated when your news comes from the people you know. When you come across people who share a lot of stuff you don’t care about, it’s tempting to unfollow (unfriend) them. Some people I don’t mind removing from my connections; others, it feels like an unneeded rupture.

It’s tempting to segregate sites based on audience: Facebook for personal stuff, Twitter for work stuff and social commentary, LinkedIn for serious work stuff. When I took that approach, I found I had three personalities to maintain. Also since most of my interests revolve around work, I shared mostly on twitter, and I hardly shared on Facebook. It all felt like a lot of stuff to manage.

And then it’s tempting to block off whole social media sites for reasons like “there aren’t enough people I know there”. I have a good friend who posts on Google+. I had decided I didn’t want to join him on Google+ on the basis of Google+’s unpopularity. I also already had too many other sites to visit. Google+ was one too many, and here I was shrugging his virtual presence off for having chosen the place where he wanted to express himself. I was missing out. Another unneeded rupture.

These days, since my news comes from (and through) the people I know as much as from news publication sites, it’s tough to find a balance between following too many and slowing your pace down.

Stephen Covey, in his book The 7 Habits of Highly Effective People, spoke about what he calls ‘the maturity continuum’. 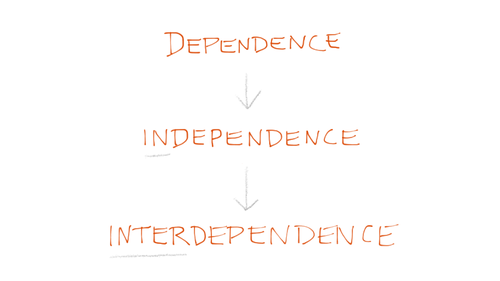 This model illustrates the three stages of maturity a person can be in: dependence, independence, and interdependence. The maturity continuum applies to relationships; for example, the relationship I have with my parents:

At one point, I was dependent on my parents. When things went wrong, to me, it was their fault. I was losing and they were winning (I lose, they win). Then, I sought independence. I wanted things to go my way, even if it meant that they had to adapt to me (I win, they lose). Independence is a necessary step in reaching maturity, but it’s not the most mature state. When you reach interdependence in a relationship, you adopt a win-win poise. You’re confident you’ll do okay, and you oversee that others are okay, too. I no longer seek what I used to depend on my parents for, and now I can give to them freely.

This model applies to our relationship with technology, too. When I’m tempted to ditch a technology (which is fine), I remind myself that it’s an independence move I’m considering. Then I consider a way to get the most out of a piece of technology while still being its master.

So when looking at options to fix the abundance of news and the unmanageable amount of friends I followed, I knew some of my impulses were immature. Wanting to unfollow people was like wanting to regain independence over a medium, even if it meant rupturing relationships. It wasn’t necessary to do that.

There had to be a mature way to handle this: staying connected with everyone I wanted, and on every channel I wanted, and get all the news I wanted, without spending hours a day doing so, without the foolishness of cutting off people from my virtual life. There are just so many benefits to this way of getting news.

It was time to stop thinking in black and white and start thinking in gradients. I needed to figure out who mattered most and who mattered less — for me. For that, I used the idea of circles. Not disparate circles (many lives), but concentric circles (one life). 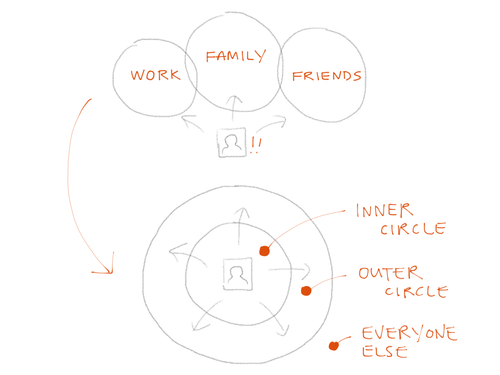 Google+ has the idea of circles, and Facebook has some basic groups it proposes (e.g., family), but I think it’s all wrong. I don’t have friends separate from family. Making family a sacred island creates absolute thinking like “I should keep up with all my aunts and uncles the same as my Mom and Dad”. Work acquaintances? Friends? I don’t have three lives, three Pascals, there’s just this one.

So I made a list, and came up with two concentric circles: my inner circle, my outer circle. Everybody else falls outside of those circles.

My inner circle is composed of, in order of descending importance:

My outer circle is composed of:

For the people in my outer circle, I try to connect with them at least once a year. For the ones close to the top, every couple of months. 1

These circles helped me a great deal with my life in general, but more importantly, they were the thing I needed to help me sort out my virtual connections, too.

Skip the main feed, use lists

Keeping with the main feed poses a problem for me: the more people I have in my list of connections, the more my attention gets diluted between each person. The people that share a lot get a lot of my attention. The ones who post less, I might miss when they do. The main feed is broken for me. 2

Thankfully, there are lists. Lists are feeds, just like the main one, for which you can pick the people whose updates will be displayed. Twitter has lists (a list can be public or private; I use private lists); Facebook has lists; Google+ has circles, but they’re just lists.

So on each site, I created two lists: Inner circle and Outer circle.

So now, I skip the main feed completely and just check these two feeds on each site. They contain the updates and news from the people that matter the most to me, those most important updates I don’t want to miss.

I rarely check the main feed anymore. So why do I stay subscribed to everyone else?

Aggregate all the rest

I use Flipboard on my iPad. It connects to each of my feeds (Twitter, Facebook, LinkedIn, Google+), and it sees the news from each feed. It has another feed, the most interesting for my use, called ‘Cover Stories’.

Cover Stories works this way: Flipboard looks at all the news from all the feeds, then using data from all other Flipboard users and data like the amount of likes and comments on each news item, it knows which news items are the most talked about. If a news item matters to many people I follow, I’ll see it in Cover Stories.

The more people I follow, the better the Cover Stories knows what news item matters for me to see.

What about sharing? I used to share only once in a while, but now I share a lot more. There’s no more “Twitter is for work stuff, Facebook for personal stuff.” I now share on every site I’m on, because that’s where my people are. It’s a bit of copy and paste, but at least everybody that cares about me gets the complete picture.

For the stuff that’s public, I share everywhere. For private updates, I’ll post on sites where I can control who can view my posts.

A system that scales

So by using the idea of the circles, I was able to prioritize my sources of information. Using lists on each social media site, I read about the people in my circles first. That allows me to concentrate on the people that matter and follow as many people as I want. And then, using news aggregation tools like Flipboard, I can stay on top of the top news from across my information sources.